Last weeks article on the 3rd edition “starter box” got me thinking about Dark Eldar. Now, for those of you who don’t know, Eldar have been around from the earliest concept of 40k. Their dark cousins however were not a fully developed army until 3rd edition. Last year saw the update of their codex since 3rd edition, and rightfully so. (Though they were still competitive, they did need an update. Necrons however are in more need of an update than Dark Eldar were, but that is an article for another time.)

So, we know what Dark Eldar came in the starter box, and we know the current line. But how did they develop? What were the early days of Dark Eldar like? Read on inquisitive 40k history student, and learn of the brutal race!

From Wikipedia - Games Workshop decided to make the Dark Eldar as a separate army, after it became fairly common to see gamers collect "Dark Eldar" armies, which are total conversions/customizations of Eldar miniatures while still retaining the standard Eldar rules. It was also relatively convenient to add the Dark Eldar to the existing Eldar storyline without any conflict, right at the catastrophe that destroyed the Eldar home-world. 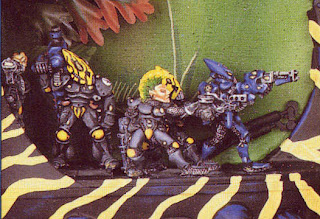 Upon further research, this is 100% accurate. (So my reliable sources say.) The Eldar in the age of Rogue Trader were pretty dark, wild, and basically like the punk-rock race of space elves that they are a far cry from today.

﻿﻿
﻿﻿ While the Eldar developed into what could be considered 2 separate races, the other armies remained virtually unchanged at the time. (Gone were the days of Squats, but we got Tau to replace them…and rumor has it the Squats are returning!)

So, in essence –
Orks were still green skinned war-like race bent on a good scrap.
Imperial Guard were still mass number of “normal” guys and lots of tanks fighting incredible odds.
Space Marines were still mutated warriors that turned everything they touched to gold.
Chaos was still daemonic/warp influenced band of warriors bent on the destruction of the universe to please their patron god.
Eldar however enjoyed a time of change. (Fitting since their race “created” the lord of change.)

Thus, the Dark Eldar were born.  It wasn't until 3rd edition that they received their own codex.  (And a big boost from the starter box!) So, after the codex release players were clamouring to get their hands on the Dark Eldar right?  Well, not exactly.  I can only remember there being 1 maybe 2 Dark Eldar players at any tournament I attended.  ﻿4th edition saw many codex revisions, but not for the D.E.  They got what was called a "Second Edition" update to their 3rd Edition codex.  What this meant was they had access to some new wargear, list options, and vehicle upgrades, but no new units or rules that were significant.  So again, though a few more players picked up Dark Eldar, they did not receive much love.  I can attribute this to a couple of things.  A.) the models - there was not a whole lot of selection to choose from, and a lot of them were metal increasing the price.  and B.) the style of play that the Dark Eldar required was what I can only term as swift finnesse - the army on the whole needed mobility and a tactician who would excel at sneaky tricks, and strange combos.  (Not a beginner army for sure!) That brings us to 2010.  GW released a brand new Dark Eldar codex with a slew of new models and lots of love.  Sure, they still require some finesse to play, but now they have more players sprinting down the learning curve, and look cool losing while they do!
Posted by Auberoun at 5:19 AM