So here is a tank I had sitting around.  Ok, it is not quite like it was when I built it the first time.  I had the original Leman Russ with a few orky bits glued on, painted in my old scheme from 2000.  (Orks were really green, and my gretchin were almost neon in color.)  So, I had this tank under the old 3rd ed rules, with turbo booster.  I think hakomike may have a pic laying around of the original model somewhere.  This is a work in progress post, lots of details left to do, like the top of the stikkbomms need paint, some glyphs and armor plates need some paint/decoration yet.  The "grey" of the tank is actually a kommando khaki type Vostroyan scheme.  I am not sure why it came out so grey to the camera.  I decided to go blue with the main color since it fits the united Waaagh! theme that I am doing.  Looted = Deffskullz since they are the best at it.  And of course I had to add enough red to it to count as a Red paint job.  Not to mention make it look like the orks painted it, which was tough considering I had painted it nearly like a perfect Vostroyan tank base coat, and messed it up on purpose...
Taking some inspiration from the Ork Codex, I decided that something needed to be done to the turret.  So, I cut off the cannon, and used some pipes from the 40k building kit.  Then, I added some spikey bitz and chain around the turret to orkify it even more. 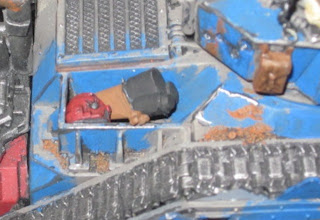 Check it out, a poor beakie lost 'iz life and 'iz 'elmut...hur hur. 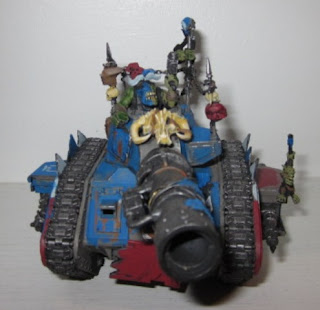 Hey ooomies, we gotz ur tank, now it shootz wiff a bigger bang! 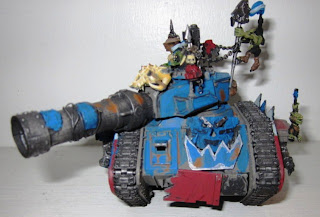 Wot tank wouldn't be komplete wiffout a effigy of Gork in da front? 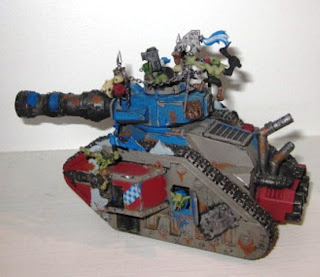 We didn't change dis side much from da oomies paint job, so we can sneak up on dem. 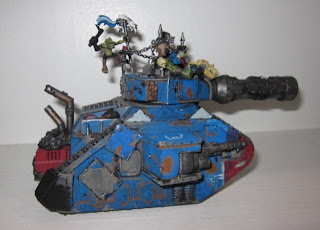 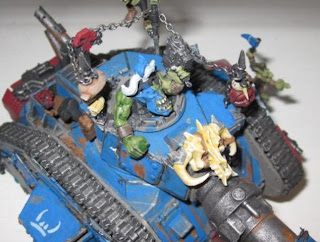 Dat dere skull is from a beastie dat we killed a while back...course, by beastie, I mean we looted it from a trukk in camp fair n square. 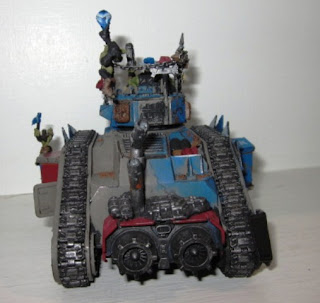