Strap yourselves in the time-machine, we're going way back to 1987 to the days of Rogue Trader. Back when it was still part Roleplaying game, and part mini game. Along with the roleplaying game, there were many other things that were trial and error in this tome. One of which was the numerous races that inhabited the universe. Some of these races were carried over all the way to the present edition. Many, unfortunately were lost, (Squats among others.) One of these lost races were the Jokaero.

An ape like race...ok,we all know that 40k has many blatant influences over the years, but Planet of the Apes? Really? Although, the Jokaero never had a model...it would have been interesting to see this idea come full circle. Perhaps it did, and that is why we have the Tau Empire now.

I think it would be cool to have an entire army of primates, that are really technologically advanced. Ok, I am thinking make it a challenging army to play. Each standard trooper is like 100 some odd points. But they have really strong weaponry, and 7-9 stats all the way across. And they have small weak, monkey like creatures that would be a supplement to the "main" army. (Kinda like Ogre Kingdoms for 40k.) Would be interesting...oh well, I can dream. Perhaps some house rules will be written someday...

Here is the original Jokaero excerpt. 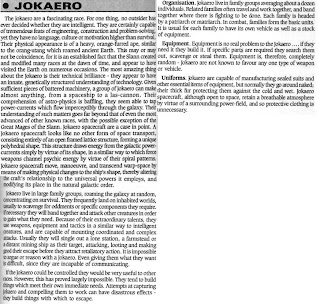