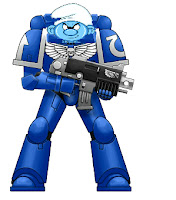 So, I finally watched the Ultramarines movie at Mike's.  I know there are plenty of reviews out there worth reading, and my oponion pales in comparision to an actual review.  SO, without further ado, here is my personal  take on it without giving away any spoilers.  (Keep in mind, that it was late when we watched it, I was tired, and these are only opinions as of the current moment, they may change after I see the movie again.)
First off, I will say I did actually enjoy it.  I went into with expectations not being too high, as I know the budget for this movie was pretty low. (It has been said that there are video game cinematics that cost more for 3 minutes of footage than the Ultramarines movie did in its entirety.)  That being said, I found the animation was pretty good.  Although, it did seem wooden from time to time, the action was fluid, and I enjoyed the overall feel of the movie.  (Even if I did feel as I was watching the animated Starship Troopers show at some points.)
I did think that the atmospere of the movie was just ok.  I realize that Dan Abnett as good as his novels are, is not yet a screenwriter.  Notice I did say yet.  I hope that his screenwriting skills do improve, as overall the plotline though thin in some regards, and did not do justice to the story of chaos, was good considering the budget they had to work with. (And the length consideration for the movie.)  I expected a little more conversation from the Chaos marines and or daemon.  In the books, it seems Chaos is always trying to get marines to "see the light" and turn them to Chaos.  There was none of that here, so it just kind of fell flat.  I kept making jokes about certain things, "Oh, that guy just rolled a one on his armour save..." So, as I did like the movie, I was really hoping for more stuff overall.  I realize that this is just an "introduction" movie.  It was made for fans, and it did a good job fitting in the universe of 40k.  It also does a good job introducing people who have never heard of 40k, to the universe, so they couldn't put too much into it, as it would overwhelm the audience.
My biggest dissapointment was that there were no orks, and they chose UltraSmurfs instead of Dark Angels.  (Ok, I am a bit biased.)  But, I feel orks are brand name recognition along with space-marines.  And, if included, they could have promoted the hobby a bit more, with a "trailer" for Black Reach before the movie.  (As the box set contains Orks and Spacemarines.)   And with Chaos being the enemy, the past of the Dark Angels and their zeal for fighting Chaos, would have been much better.  Just a thought.
Overall, I felt the movie was like the 1968 Planet of the Apes.  Now, before anybody gets upset, let me say I thouroughly enjoy that movie, and Charlton Heston is awesome.  Here is why I compare the two.  Planet of the Apes takes a while to get into it.  It is somewhat of a slow start, and there is a feeling of isolation with its vast empty spaces and music and such in the first part of the movie.  Ultramarines is simular in as much as they don't encounter the enemy for sometime, and there is a lot of smoke to elude to the mysterious nature of the mission.  I do appreciate that the movie isn't non-stop action, audiences have grown bored of such movies, and in today's society, you need to "wow" us.  The first 30-40 minutes failed to really "wow" me.  So, I like the movie as a whole, and I hear it is better the second time around, but I am glad it did not come out in the theatres, as it would have been an embarassment.  And, I am glad that I didn't pay $15 for a ticket.  I had low expectations and was pleasantly surprised.

Bottom line - Overall a good rendition of 40k, but remember what they had to work with, and fast forward to the good scenes.
Posted by Auberoun at 8:46 AM