As the Marines move deeper into Hive Incedius Mortis, to recover the stolen data, they encounter more of the Greenskin menace than they had bargined for.
Killzone - Encounter Scenario
Deployment zones 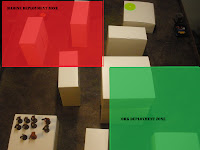 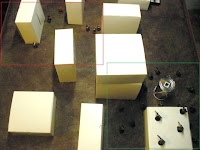 Turn 1 the marines moved into a forward position, and opened fire with their plasma gun, killing one ork boy.  The boys moved forward excited to see some proppa fightin'!

The orks await some targets for their dakka.. 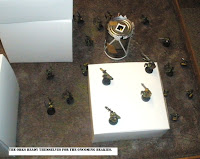 ﻿
Turn 2 saw the orks call the Waaaagh! And get to krumpin' some beakies. 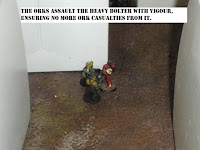 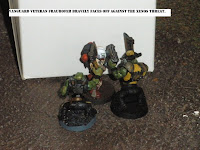 ﻿
By this time, my big shootas were really doing well along with the shoota boyz.  I have never rolled that many 5-6 in a full 1500pt game, let alone a small skirmish like Killzone!
Turn 4 - The heavy bolter Marine survived the massive 8 Strength 4 attacks that the boyz inflicted upon him, and did not do any wounds back.  "Noe wot dat means?  Pour more boyz in da mix, and they will surely krump im!" 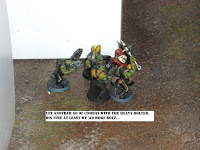 Turn 5 saw a lot of action.  2 Marines died from dakka, and the third was assaulted by 2 boys and a nob.  No contest there, but since the mission awarded extra points for each model in the enemy deployment zone, I was more interested in taking out the plasma cannon, and the heavy bolter.  The plasma cannon had only one target and he missed.  (My opponent even said, "Darn it, I was not going to shoot with him, so he could help his brother marine in melee with the orks")  The orks piled on the Heavy Bolter marine, and the Veteran finally fell. 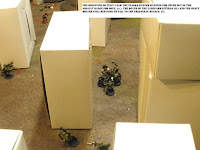 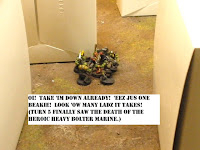 Turn 6 - one marine remained in melee with a nob, and 2 boys on the orks side.  And there was the plasma cannon to deal with.  (Marine morale check passed.)  A slim chance, but if I can hit the Plasma cannon with my rokkit boy...

All in all a good game.  I felt bad for Mike whose dice were not treating him well.  Gork was definitely present as all the Marine shooting went poorly and all the Ork shooting went great.
Fluff to follow soon!
﻿
Posted by Auberoun at 3:08 PM